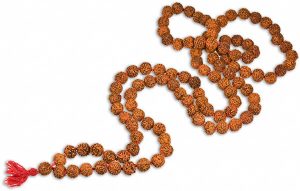 As we approach Summer Solstice and honour the Sun with 108 Surya Namaskars, 108 Sun Salutations I thought I’d explain about the meaning of 108.  108 is considered a sacred number in Hinduism and yoga. Traditionally a mala is a garland of prayer beads, that come as a string of 108 beads (plus one for the “guru bead, named Mount Meru” around which the other 108 beads turn when used in the hands, this is  like the planets around the sun). A yoga mala is used for counting, as you practice japa mantra, you repetitively repeat a mantra say 108 times, this is like the Catholic rosary.

The string of beads represent life as an endless chain of events and bought together by the Mount Meru or the Guru bead. Mount Meru symbolises that you can rise above any of your perceived limitations and free them from the heart. The Guru guides you on your journey of life and supports you to evolve through life’s events. Since the mala is often held at the heart level this honours the devotional aspect of mantra ritual.

Tantra is a practice that acknowledges the body as a temple or church, where the God/Goddess of your own unique awareness resides. Tantra teaches us to worship, be open to and embrace our shakti. . Like the beads on a Mala, Tantra links al the gems that are diverse aspects of us, life into a mandala (circle).

For Summer Solstice, the 108 Surya Namaskars become the prayer, your body the mala, every breath every movement an offering to the Universal fire of the earth, the Sun, Surya and you are tending your heart fire that mirrors the universe fire and conquering any limitations through the prayer of the body. When you combine an intention the practice becomes an embodied prayer…

108 is a holy number, in that 1 written as a vertical line symbolises God, or Divine Energy from which all other lines begin. 0 represents a circle, revealing God’s creation is complete and 8 when looked at horizontally is the mathematical sign for eternity or infinity, reminding you that creation goes on eternally…

108 carries a lot of spiritual significance throughout many cultures:

For us on Summer Solstice workshop – Wisdom, Warriors and the Sun  is to invoke divine intention for this Surya namaskar, a honouring of the Sun, the fire of the Universe on this day of Summer Solstice the sun at its peak.  This brings your meditation to motion, where your intention form the mind is to step into the sacred practice and the ritual of  body becomes an embodied prayer, each vinyasa a bead on the mala with the intention for the highest good of yourself and for everyone….

Irrespective of the meanings of 108, it ‘s important to remember that a yoga mala, the prayer beads, is a form of meditation, and like prayer beads each sequence is practiced with devotion, awareness and sincerity.

Join us for a wonderful workshop!