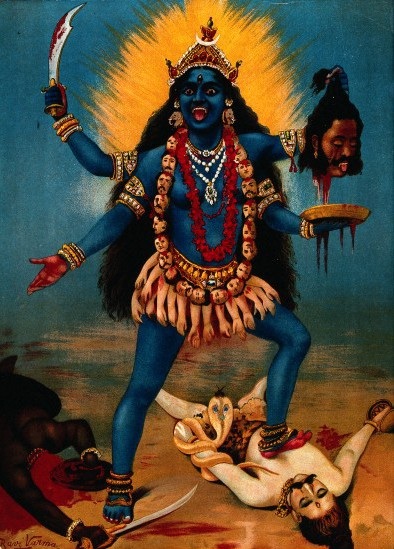 So in my previous blogs I’ve talked of Durga and Kali Ma, and in Durga’s story in the Devi Mahatmya I tell you how all these goddesses in their light forms emerge from Durga… well this story now is the emergence of Kali Ma! but first….

When you first see Kali Ma, what arises in you really? Be honest…

Unless you’re like me who sees her immense love and beauty, you may have feelings of horror or disbelief or discomfort and think what on earth does she have to do with yoga… Well I am going to tell you: She has  everything to do with yoga!

As you can see Kali is not into bling, her necklace is made up of skulls, and so she doesn’t conjur up images of a nice sweet little goddess. more the one you’re afraid of, especially if you are shy… Yet in reality, she represents the dark side within all of us. – Some of us are more familiar with this side and if you’re like me embrace it! My mask came down long ago when Kali gave me an awakening. Here I’m going to begin to tell you her stories, with the emergence of kali Ma. You may begin to see the mythical story invites you into your own story, the one you maybe tell or hide behind. All you need to remember for now is that you are EVERY character in the story! mmm that means even Kali 🙂 for me , I LOVE that!

So here’s the Emergence of Kali Ma

Kali’s birth is when Durga is being threatened in the battle of the Devi Mahatmya, it is the only time that Durga frowns and her serene face distorts, beacuse she has had enough of the drama and games on the battlefield of life.  And so as she frowns, her third eye burrows and out of the third eye of Durga, Kali emerges. In the battle both Kali and Durga are warrior Goddesses as well as mothers bought forward to bring the chaos to order and so they destroy for the highest good. I ask you;

Do you ever call forth your warrior goddess for the highest good?

Are you a mother that would protect her children and invoke your warrior spirit to do so? 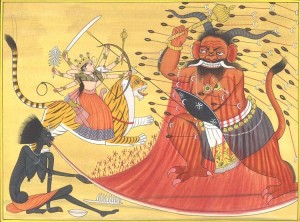 So back to the story, Durga is being threatened by Raktabija, Rakta is blood and bija is seed and his magical powers are when a seed of his blood drops, more forms of him appear on the battle field. So in the throws of battle with Durga, more and more Raktabija’s are rising up and Durga needs to call forth the fiercest form of herself.  And she does, out of her third eye, the emergence of Kali Ma is born… drum roll please….

Kali Ma goes to work…She confronts Raktabija easily and goes to the root of the struggle/battle; Kali has NO PATIENCE for the small stuff, the stuff you wear to limit yourself  and Raktabija limits you. She faces Raktabija, with one swipe of her sword, which is the sword of truth. She cuts off Raktabija’s head of disillusion and at the same time with her long o so loooonnnnngggg tongue she licks up all the blood before it can touch the ground! BOOOM! game over!

so what does this mean for us Yogini’s?

do you look outside of yourself in the material, physical worlds or seeking happiness in other people?

Is your mind constantly thinking?

are you a pro at multi-tasking?

Multi-tasking, endless to-do lists all truly agitate the mind so much that you are tired, exhausted or running on adrenaline.

Kali eats up the poison of these emotions and transform them into medicine to reveal your true self. She devours all the demonic forces within Her and transforms them so the light of the self shines pure – THIS IS OUR YOGA PRACTICE. So you see Kali has everything to do with yoga. This is utterly Tantra, everything is so intimately woven together.

So Kali is not this fierce form that is scarey; she’s real, a mirror to you saying maybe you are looking like me running around on the battle field doing so much multi-tasking!

Let’s go deeper into the emergence of Kali Ma

If we go deeper into the myth, we see that the Demons will not always give up their throne of power in the dark, they put a lot of effort in and receive boons in the myths.

Kali must take any form needed to be able to devour the demons suffocating rigidness so the energy flows. Kali shape shifts. Kali’s dance is one of creation and destruction: one cannot be without the other. She shape shifts through the battles of life and this is what your yoga practice invites you to shape shift through a class, life, challenges, especially when your demons or the contractions arise.

I recently began to think of the many arms of the goddesses which carry weapons of consciousness, as a mirror for us to let go of the mutli-tasking with our own many arms. So we become more conscious in One thing… When we bring our awareness to one thing we bring presence to it so that you feel the fruit of the practice. That’s where you begin  to taste it, savour it, digest it and become one with it and then move on to another task…

Does you mind constantly think of all the millions things you’ve got to do and try to do at once?

Do you truly embody your yoga practice so it brings order/peace/ love to chaos/arguments/fear?

I invite you to let your Kali Side emerge and embrace her to show you the path to liberation! or at least let her release the bent up frustration that you/we/I inflict on ourselves when trying to do so much. Your Kali side yearns for you to bring calm and slay the fear that covets your primal love!

another Kali Ma story in the next blog!