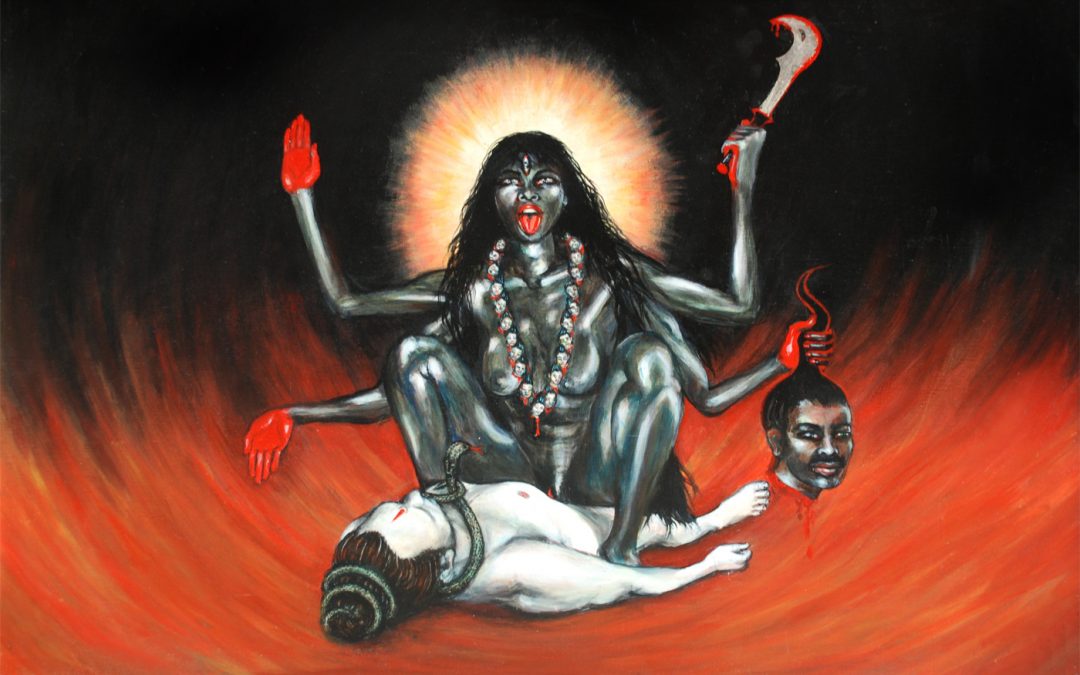 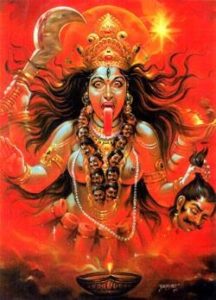 What I love about Kali is she is the Devi archetype unaffected by rules and opinions. Kali’s Tongue literally is sticking out mocking the rules, the judgments, the projections and the opinions of others. Especially the establishment or the patriarchy.

Is this not what many women are doing now by speaking up, using their voices to say

I call forth Kali a lot to empower me to shape shift, to embrace the truth of who I am and rest in my power that has no patience for the BS. Or the multiplying Raktabija’s of my doubt and fear, or lack of confidence. If you remember the story I share, it details all this symbolism.

The last is what Kali’s tongue is all about. Kali Ma is the primal raw power of the birthing process.
Yet let’s explore the others. In Hindu mythology nakedness is symbolic of wildness and this goes against the patriachal, western society control. The unbound hair is wild. Clothes symbolise a civilised society , whereas nakedness represent the wildness beyond society’s rules or social graces.

Many of us fear this kind of raw emotional nakedness and conform physically, mentally and emotionally.

When I was in India as my Guru’s temple my hair was loose and free and one of the temple keepers asked to tie my hair, I said of course and smiled, yet within minutes my hair unbound herself. Then on my last day, I was dressed in red, hair lose and dancing in the wind, my kumkum on my third eye huge and another temple Prietess said ‘wow Kali is back” as she smiled!

Kali is empowerment for the new feminine rising. From a Tantra perspective Kali’s tongue is more than her licking up the multiplying thought processes. 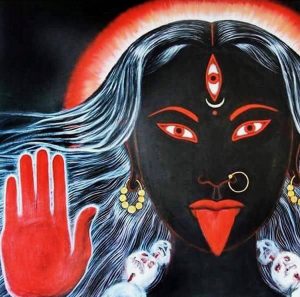 ▼ Mocks limitations and assumptions of the human gaze
▼ Kali reminds us that whole nature is sovereign. So the human gaze that judges sex and violence. She wakes them so there is no choice but to submit her.
▼Her nakedness refusal to submit to male gaze. This is a symbol for women’s freedom.

She embodies raw feminine energy before forced to conform to patriarchy.

She sticks her tongue out in defiance to society’s disapproval.

Or Kali’s Tongue could be coming out in jest to anyone who seeks to judge nature that is continually cyclic and birthing like nature.

Kali stands on Shiva or sits on him in sexual union

▼  Another judgment – society rejects this. 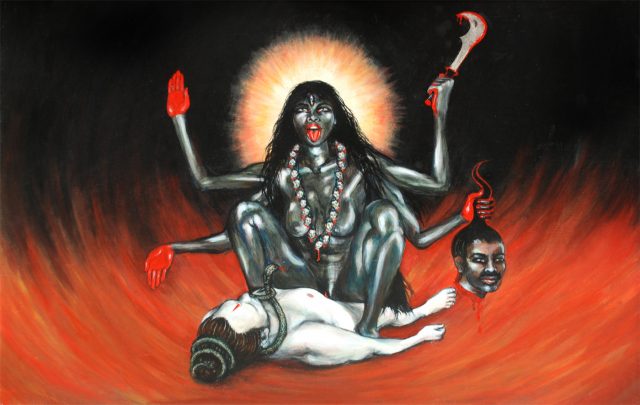 Sri Amritananda Natha – Guruji on Kali “The creative aspect of Kali is also symbolized. In one hand She holds the ‘fear not’ posture and in the other ‘I bless you’ posture. The ‘fear not’ is to remind you that the universe is just a passing chimera of a thought …The blessing is to remind you that you are beyond time, Her creation. That you persist beyond space and time. That you are going to create fresh relatives, fresh worlds through Her. She is the lusty female, hungry for sex. She is worshipped through reverse coitus.”

Kali refuses to be invisible. Shiva only becomes auspicious one when he begins to engage with Kali as she sits on him, she creates – this invokes consciousness.

Eroticism is not to be indulgence or desire but to confront one with our deepest fears.

Kali teaches a devotee  to break free from social structures and customs.  Then is offered Kali Grace of security as they connect to the Vira, the courage a hero within.

How to Practice with Kali’s Tongue

Try sticking your tongue out, you can’t help but exhale with a sound of HAAAAAAAA, usually with passion or anger, but it isn’t soft is it. if it is there’s no feeling.

▼ So when your mind starts to project thought processes that are those limiting, or feeding the small self – stick your Kali’s Tongue’s out!

▼ When someone is judging you or projection there stuff onto you, stick your Kali’s tongue out in remembrance of the truth of who you are – I’m not suggesting you do it right there an then – try metaphorically sticking your Kali’s tongue out. or if you dont give a damn go for it – they might be surprised.

▼ Lastly in sexual union, try connected to your wild Kali side, wet your lips, soften your mouth – your tongue doesn’t have to stick out as describe above, try more softly. I teach in my Shakti Tantra Yoga how your jaw is the pelvis,  your lips reflecting lips of the yoni and the tongue – what might your tongue be?