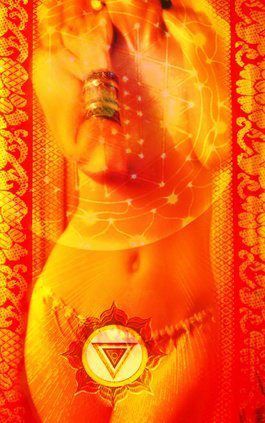 As i said in my last blog Awakening Shakti, Shakti comes to reside within the physical body as Kundalini Shakti and is the human form of the Shakti, The Divine Feminine, which is the power of the universe. In this blog I am going to share the Tantric philosphy of creation and how the play of the masculine and feminine energies are within the dance of life.

In the Tantra Tradition the way the story is told is, twenty billion years ago  She, the Divine Feminine, The Goddess, leaping up in bliss creates and manifests the entire subtle and manifest universe within her own cosmic mind. This is the energy from which the big bang emerges in the form of a primordial fireball exploding into being. Everything in existence today still pulsates with this light and power which is Shakti, who at her essence is love. From this original burst of life we have Earth, the sun (Surya), the moon (chandra) and all the other planets and heavens.  The divine feminine comes to rest inside the earth in the form of fire. In the human body She comes to rest inside the subtle body, which is the energy of etheric body,  in the form of resting fire of a coiled spring of light as  Kundalini Shakti.

Kundalini Shakti is your inner energy and the divine within and is what Christians call Holy Spirit. 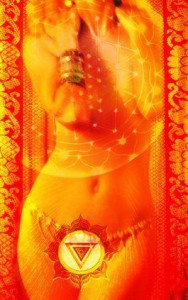 The word Kundalini is  made up of, “kunda” meaning bowl or pot in which a sacred fire is kindled. “Lini” means coiled. Kundalini comes to rest coiled within the kunda within the body at the base of the spine within the Muladhara chakra, also known as the root chakra,

Kundalini is your inner guide, your spiritual guide, which is like sophisticated navigation system of your spiritual journey, waking you up and guiding you down many paths of life. Kundalini is within every human,  some she is active way and others an apparent inactive form. Kundalini may be seen as a Goddess as the Divine Mother,  and also the expansion of the energy of your soul.  more on this relationship between the two another time.

Masculine and feminine, Shiva and Shakti

The feminine is Shakti, she is radiant, full and everywhere. She dances in the breeze and the plants, she throbs and pulses in all life like your heartbeat, from the blossoming of flowers, to the spark of laughter of you, to the voice that sings, to the growing and blossoming of a mama-to-be belly. She is in your tears and your stabbing pains… She urges and invites you to grow, evolve, awaken and move. She is this pure energy, chaotically free and the very fuel for all activity. She is the very life-giving force, the creative pulse of life.  There are many aspects of Shakti coming in many forms of goddesses, as well as an aspect of Shakti that is Kundalini Shakti. In everyday life is experienced as the breath called the prana shakti in sanskrit.

and who is her partner::

He is the mighty, wild yet tamed Shiva, The Auspicious One, he is the wisdom of pure consciousness, the divine intelligence that brings chaos into order. he is the ground of being, he is formless, inert and he rests in meditation. He is awakened much the same as you and I by Shakti, otherwise he remains inert and us unawakened. As you may know from my Maha Panchabhuta series, the breath, prana is essential to life, without it there is no life. thus Shakti gives life to Shiva. In everyday life Shiva is your presence and awareness 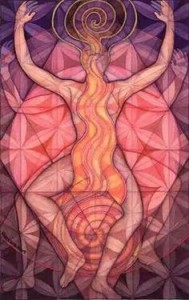 Shiva and Shakti are two frequencies/energies that co-create in a relationship… Everything in your experience in life is held in relationship; every thought, every sound, every action, all the pain or all the pleasures, every feeling is an expression of ShivaShakti and their sacred marriage and dance of life.

This is a story of separation and she has a longing to be reunited with Her Beloved – is there this same longing within you? if so it is She who awakens you and begins her journey of reunion. This is a story of awakening and transformation and  a love story of divine romance. Last year in my year of Sacred Union i taught a delicious workshop called A Tantric Wedding of Scared Union, where we took Shakti’s journey to her beloved Shiva

Kundalini is the subtle fire within, that ignites and arouses you to move. the heat and the breath moves within you is called prana shakti. It moves through your body along a system of channels known as nadis in Sanskrit.

it is said there are 72,000 nadis throughout the physical and subtle bodies through which the prana Shakti or the life force energy moves.

these nadis are like the roads on the map of life and shakti the navigation system that helps the energy move easily to open and awaken you to your fullest.

One of the simplest practices of meditation which nearly every tradition honours is the invitation to rest your awareness in the rhythm of your breath. this is dance of the masculine and feminine and the beginning of the inner marriage of the two lovers of Shiva and Shakti.

this is the nuts and bolts of Kundalini Shakti and over the year we will explore more of her or their dance along the road map of life, which sometimes is straight A to B, however more often than not there are storms as you clear the nadis of stagnant energy and blockages…